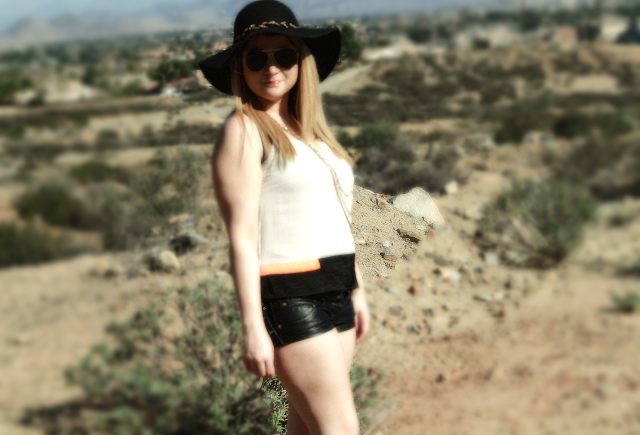 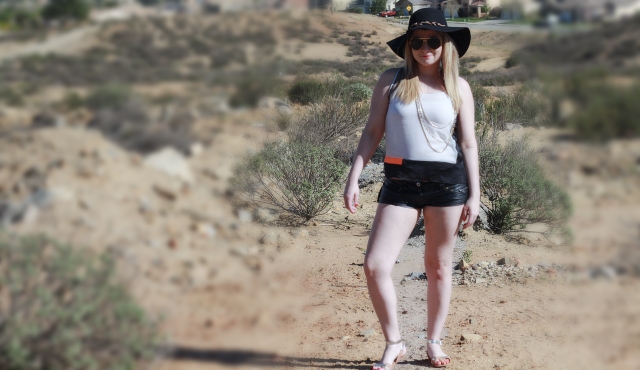 Every time I wear this shirt I’m always going to be reminded of the time my boss spilled a plate of nachos on me. First time wearing it too! And for the record, nacho cheese sauce does come out of silk!

So despite popular belief, there is more to fashion blogging than having a fabulous wardrobe. Ugh, I really wish that were all there was too it. Glorified and perfected selfies on a camera phone don’t cut it either. If you want to be taken seriously in the blogging world, an investment in a top notch camera is a must. Then begins the mission of perfecting the use of a high tech camera. Which is a lot harder than it looks. I’ve done the Youtube tutorials. I’ve invested in the books. And I’ve blown up the phone of some of my photography savy friends. Thanks Mike! You’re always a life saver!

Even though I’ve grown to love a sharp image. I still like having fun with Photoshop. This image was created using Photoshop Elements.

And while I’ve been at this for a little over a year now, I’m just barely starting to get the hang of this thing called photography. Looking back at some of my older posts, I really do cringe. Filters are not always the way to go. Even on an Instagram photo. After finally investing in a 50 mm lens (thanks to my supportive BF) I’ve grown to appreciate a sharp picture. Oh but the mission of photography doesn’t stop there. It took me over a year to get accustomed to the starter lens, and now I start the mission of learning how to work the 50 mm lens. It’s quite simple really with regards to zoom. There is none, and that’s where the only issue exists, especially when you’re at a place like Disneyland and a stranger offers to take pictures of you and your friends. The first thing I have to say is “there is no zoom” and despite this disclaimer everyone still looks for the zoom button.

Contrary to what a veteran photographer told me, this lens really is amazing. A few months back I went and had a chat with a guy who owns a photography shop and he explained that this lens was cheap and not worth the $100 price point. He explained that the purpose of the lens was to pronounce the subject with pristine focus and then blur the background. Something one could argue could be accomplished with even the most basic photoshop tools. However, the focus on this thing does not compare to even the best photoshopping tool. So far I’ve only had a few issues with the lens. First it’s super loud and can sometimes take a while to focus. I highly recommend shooting in manual to achieve the most desired outcome. Another issue I discovered today with this lens  was it’s hard to focus on a tripod when doing a photo shoot solo. I’m sure there’s a technique to mastering this that I just haven’t’ discovered yet. In the meantime I think I might just utilize the age old tradition of trial and error and invest in a marker to mark the focused spot. 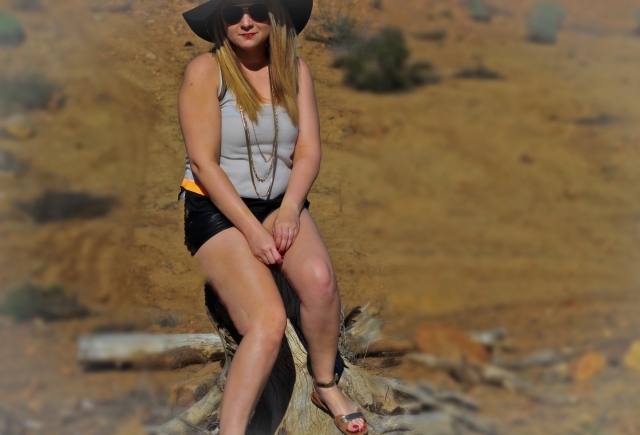 One of my co-workers introduced me to the term “vegan leather” to what I formerly called “faux leather.” I think we can all agree using “vegan” as opposed to “faux” has a more positive connotation, and even sounds animal friendly. 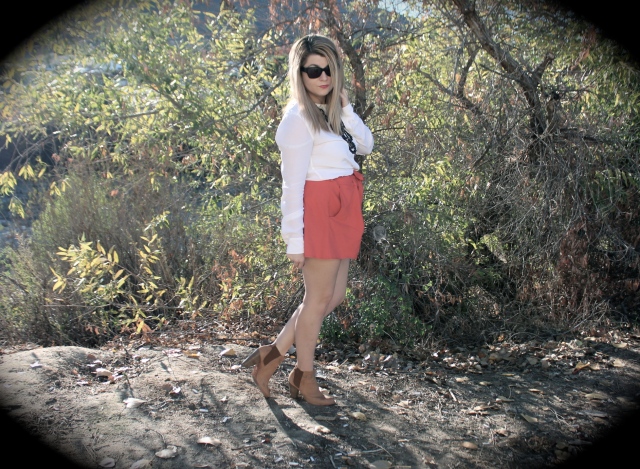 Tis the season to start busting out the sparkle, ugly sweaters and red! Although be careful because too much red and the wrong combo and you could end up looking like Santa Claus. I thought I could rock this outfit today with some black boots and no such look. I just needed a white haired wig and I would have been a shoe in for the new and improved younger version of Mrs. Claus. 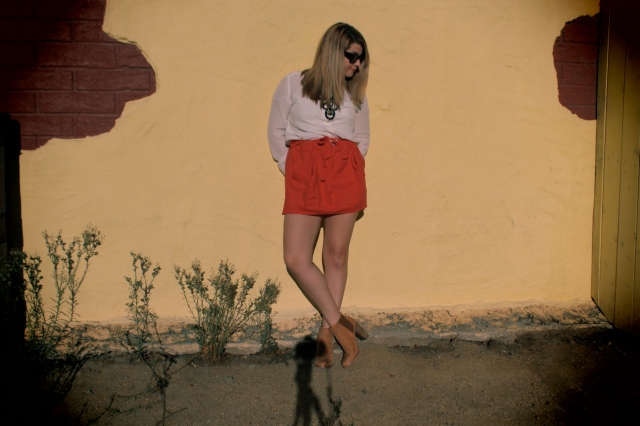 At work I always plan out the “12 Days of Christmas.” This year we are celebrating the holiday season in style by having a variety of themed days! Traditionally we are only to wear black and white with a slight infusion of grey or a splash of color in the form of accessories (borrrring!) Thus, tis the season to be a rebel and this year we will be rocking around the Christmas tree in an ugly sweater (my favorite and something I always make on my own,) our sparkliest get up for “Sparkle Day,” “Green Day,” and now officially “Red Day!” This outfit will definitely work perfect for that! As much as I love a cheesy reindeer sweater that lights up, I do love a good ol’ fashioned sophisticated holiday get up. After realizing I should have saved this outfit for Thanksgiving, I couldn’t resist wearing a cute skirt when the weather was so nice outside. Winter layers will just have to wait for another day. 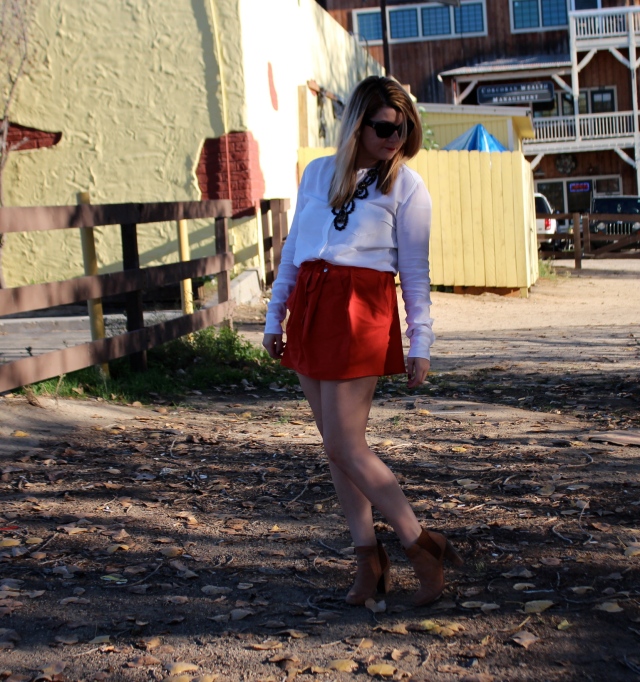 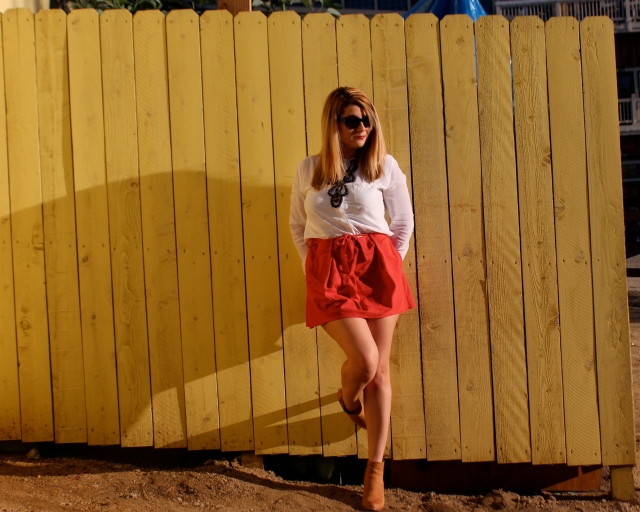 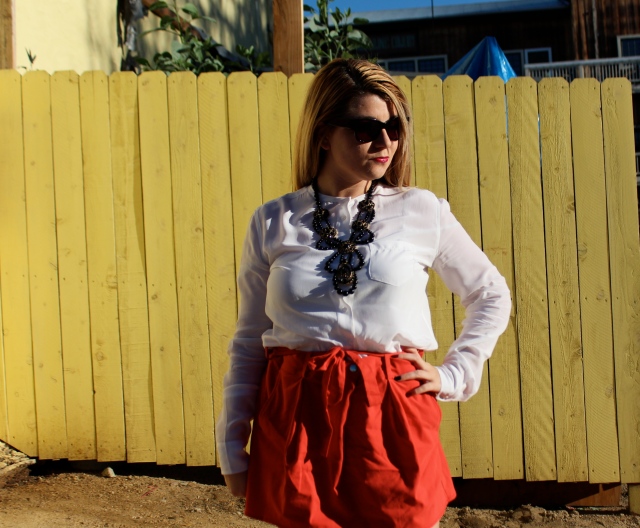 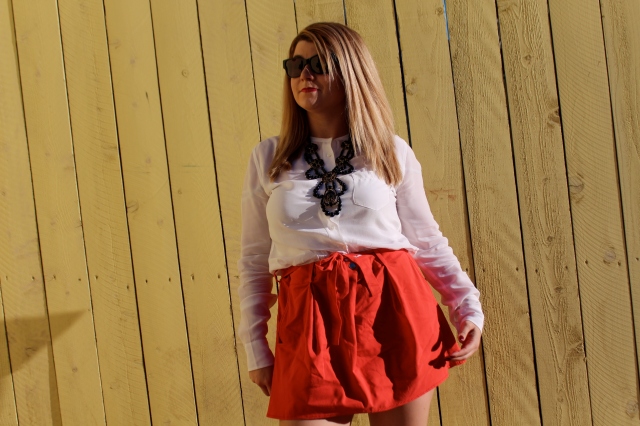 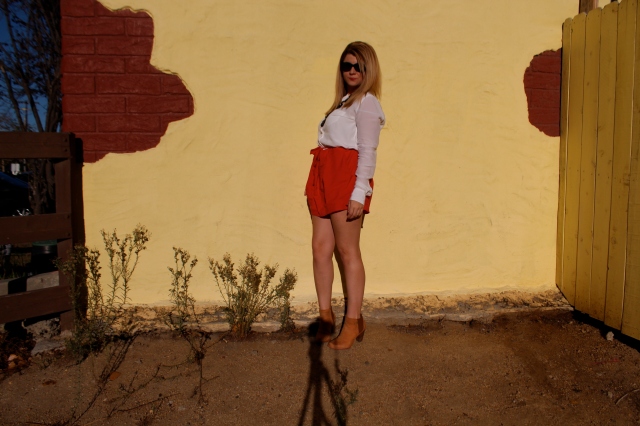 It’s hard to accessorize during the Summer when it’s 110 degrees outside and you’re trying to downsize and wear as little as possible without having to sacrifice your integrity or reputation of not looking trashy. Alas, thank you fashion gods for oversized sunglasses and large brimmed hats. Oh and one of the best things about the Fall season is I can FINALLY go outside wearing all black without feeling like I’m melting!

But now it’s fall and time to embrace all accessories! From necklaces, to scarves, and headbands which actually work all year round. I’m so beyond exciting to start layering! And while typically I love my labels I’ve been finding a ridiculous amount of good fall pieces at little boutiques throughout Orange County. While I have yet to blog about my stellar finds, I must say a fashionista on a budget need not look far to find season must haves and So. Cal classics. 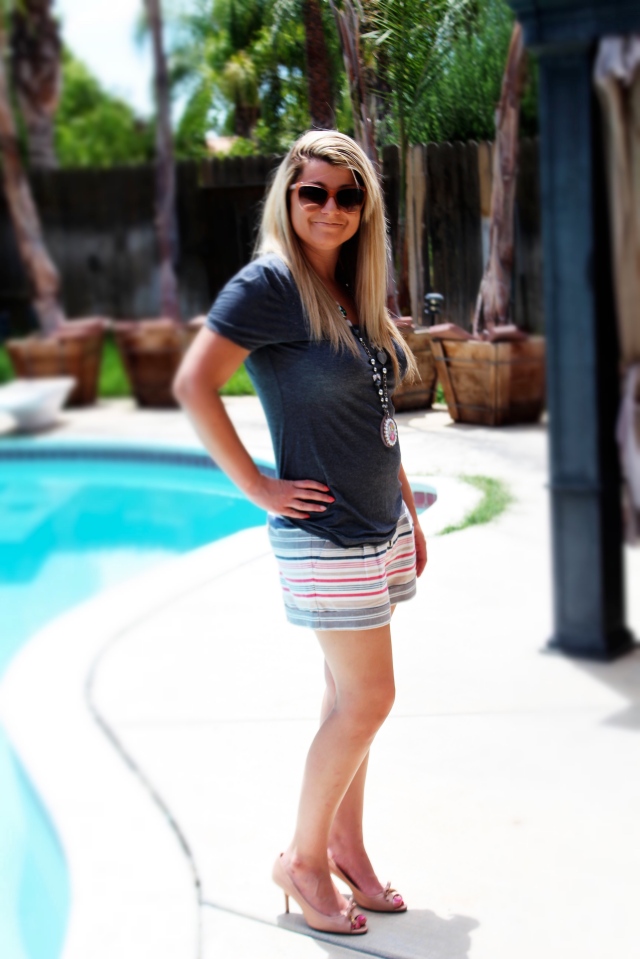 Working in retail for too many years, I have helped many a customer who have told me, “linen is the way to go when the weather gets too hot.” Well, the time has come. I finally introduced some linen into my wardrobe. And considering the weather has consistently been in the triple digits, I’d say this is one of the best decisions I’ve ever made.

I really have had no reason for previously excluding this fabric from my wardrobe, other then I have never found anything that really jumped out at me as “omg, must have!”

And leave it to me to figure out how to dress something so casual up. Casual is not really in my vocabulary. One of my friends yesterday scolded me for investing in a pair of Prada heels that he said he never see’s me wear. Thus I had to prove him wrong today and incorporate my pretty little Prada’s in to my outfit.

Who said linen had to be casual? 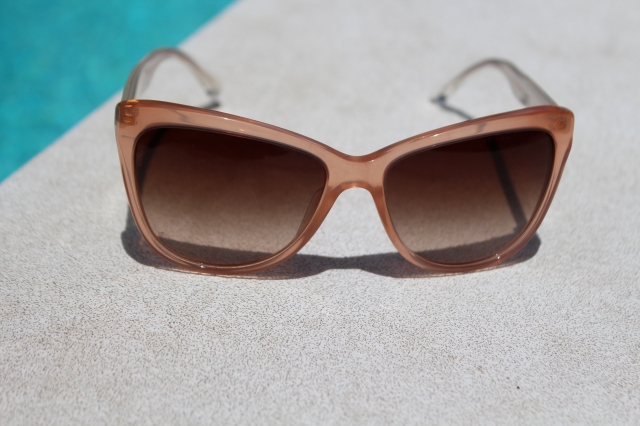 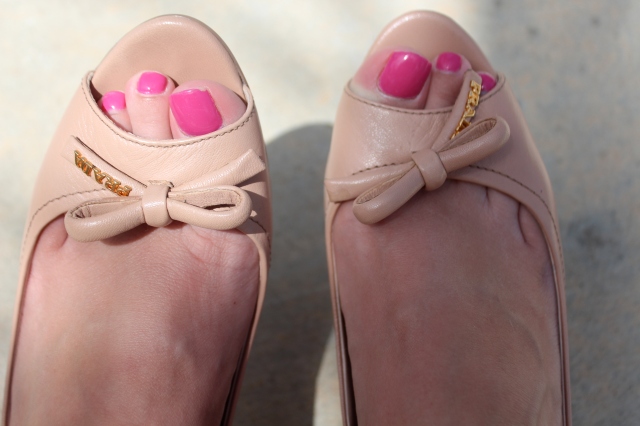 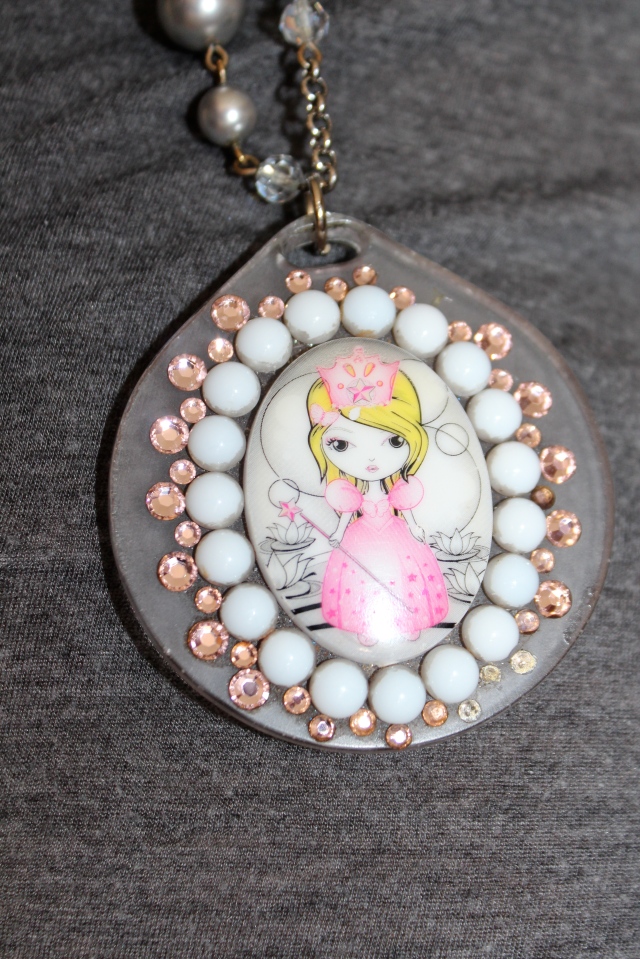 Tarina Tarantino. The answer to every accessory need.